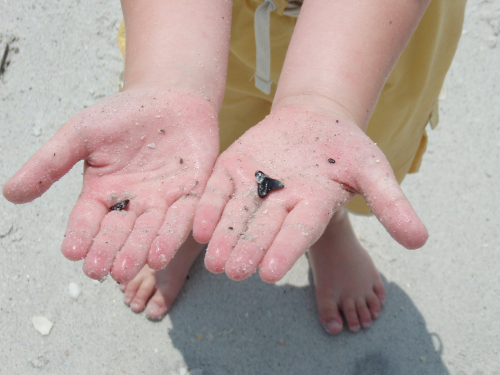 Believe it or not, but shark teeth can be found on pretty much any beach in the world. So that’s great news if you’re not able to travel very far, or if you already live near the beach. When it comes to hunting for shark teeth, you really don’t have to go anywhere special to find them.

How Many Shark Teeth Are There?

Worried that there may not be enough shark teeth left for you to find. Fear not! Some species of sharks lose up to 30,000 teeth throughout their lifetime…30,000 from a single shark! No multiply that by 400 million years worth of sharks, and that’s a whole lot of shark teeth floating around out there. With those kinds of numbers, there’s a really good chance that you’ll be able to find one. All you have to do is know where and how to look.

Venice, Florida is known as the “Shark Tooth Capital of the World” for a very good reason. It’s because there are so many fossilized shark teeth that have been found here, and there are multitudes more to be found. All possible thanks in part to its location above an ancient deep fossil layer.  And just off the beach, that fossil layer is exposed to the ocean. So fossils of all types, both shark teeth and other types of fossils, are constantly being released from the fossil layer and washed up onto the beach.

According to FossilGuy.com, “Fossils at Venice Beach wash onto the beach from the offshore Peace River Formation. They can be found in the surf around the entire Venice area, north at Casey Key to south at Manasota Key.  Venice beach and the surrounding beaches are a great place to take your family fossil hunting. There are virtually no dangers like many other fossil locations. They will be as safe there as any other beach.”

Cumberland Island is a fairly isolated locations, which makes it nice for fossil seekers. Spend some time walking the beaches here and you’re bound to not only find shark teeth, but other fossils as well.

Some of the biggest shark teeth to be found are heavy and therefore do not easily get washed back into the ocean. However, to find these large fossilized teeth, you’ve got to look under the surface, or at least where sand is being moved, such as the edges of sand banks.

With that said, surface finds at this location are plentiful. Ultimately, it really depends on the ocean currents though, on how many teeth will be either exposed or lying on the surface.

Calvert Cliffs State Park is a popular destination among fossil seekers. But don’t let that deter you from visiting. The fossils here are plentiful!

I should note, however, that although this is one of the top destinations for shark teeth hunting, most of the land here is private property. So it can be difficult to access the Calvert Cliffs.

In addition, the cliffs themselves can be dangerous, so be sure to keep a safe distance from the cliff as falling debris is known to come tumbling down frequently. It is also against the law to dig in the cliffs. You must keep your shark teeth hunt on the beach itself.

Finally, be sure to check the tides ahead of time. The best time to hunt for shark teeth here is during low tide. During high tide, the beach is often times completely under water.

Located just south of Cumberland Island (#2 on this list) is Amelia Island. And this location is known for being absolutely “loaded with shark teeth”.  If you’re fortunate enough to visit Amelia Island just after they dredge the channel, you’re in great luck.

Be sure to check out the site where they dump the dredge spoils on the north end of the Island. This pile of dredged soil will be loaded with shark teeth. With any luck, you might even find a megalodon tooth!

Although the Potomac is a river, it is still affected by incoming and outgoing tides. Even though the changes in tides are not extreme, they still flood the small beaches along the river with ease, exposing fossils.

Private property and access to collection sites can sometimes be an issue along the Potomac. So it would be worth doing a little research before heading out to this locations. Try looking for parks near the Potomac river that offer access to the river.

When you visit the island of Hawaii, there’s a lot of things to do. And of course spending time on the beach is almost the first thing most of us think about. Well, if you’re on the island, and you’re a fossil junkie, then here’s your chance to do what you enjoy doing the most…while in paradise!

Home to one of the richest fossil sites in the Pacific, the the 17-acre Makauwahi Cave Reserve will leave you speechless with its incredible display of fossils and artifacts.

The reserve offers free guided tours of the cave four days a week, during which visitors can see some of the fossils and artifacts that have been unearthed over the years — from bones and shells to early Hawaiian fish hooks and tools. Guests can also visit with the several giant tortoises that roam the area, serving as natural lawnmowers for the area’s invasive species.

The nice thing about this location is that there are not a lot of people around, meaning you’ll probably have the place to yourself, or close to it. You can read more about it here.

(The following information is from FossilGuy.com)

Located in the foothills of the Sierra Nevada Mountains near the city of Bakersfield is Sharktooth Hill. The actual Sharktooth Hill is a National Natural Landmark. However, the Ernst Family owns a large portion of property near Sharktooth Hill. They generously allow visitors to search for fossils as a pay to dig quarry. The Ernst family also closely works with the major museums in California. In fact, most of the scientifically valuable specimens found in the past 35 years come from the Ernst Quarries (Elam and Wilkerson, 2011).

The Ernst family’s passion for paleontological research is one of the main reasons for the creation of the Buena Vista Museum of Natural History in Bakersfield. This museum has a large research collection of Sharktooth Hill fossils, including associated specimens, mainly from the Ernst Quarries.

If you would like to fossil hunt at Sharktooth Hill, visit the Ernst Quarries website and make sure you stop by the Buena Vista Museum of Natural History to see the fossils from Earnst Quarries.

It’s pretty well known that shark teeth can be fairly difficult to find along the Pacific coast line. Many of us who call the Pacific ocean home have spent many hours scouring the beach and have never had the luck of finding a single shark tooth.

But there’s one location that’s worth checking out, and shark teeth have been found here. At Point No Point Beach in Washington state, you will find a large collection of fossils, including shells and other marine life. Concretions are fairly common here.  But among these fossils, if you look carefully, you can also find shark teeth.

Florida is probably the best location in the United states to find shark teeth. You can almost hit any beach and start looking. But Casey Key, Florida is an exceptional location.

In addition to being a beautiful setting for fossil hunting, the many beaches that are located on Casey Key are all excellent destinations for hunting for sharks teeth.

A popular tourist destination, Casey Key continues to be the source of fun and excitement for many vacationers who enjoy looking for shark teeth.

Mickler’s Landing is an isolated beach where you can feel free from tourist congestion and overcrowding. However, the parking here on the weekends is known to fill up fast, so show up early if you want a parking spot.

The beach here is extremely well known for it’s production of fossilized shark’s teeth. It’s so common that children playing in the sand will locate shark teeth without even looking for them.

Surface finds are plentiful and a nice quiet stroll along the beach here is sure to produce a nice pocket full of shark teeth.