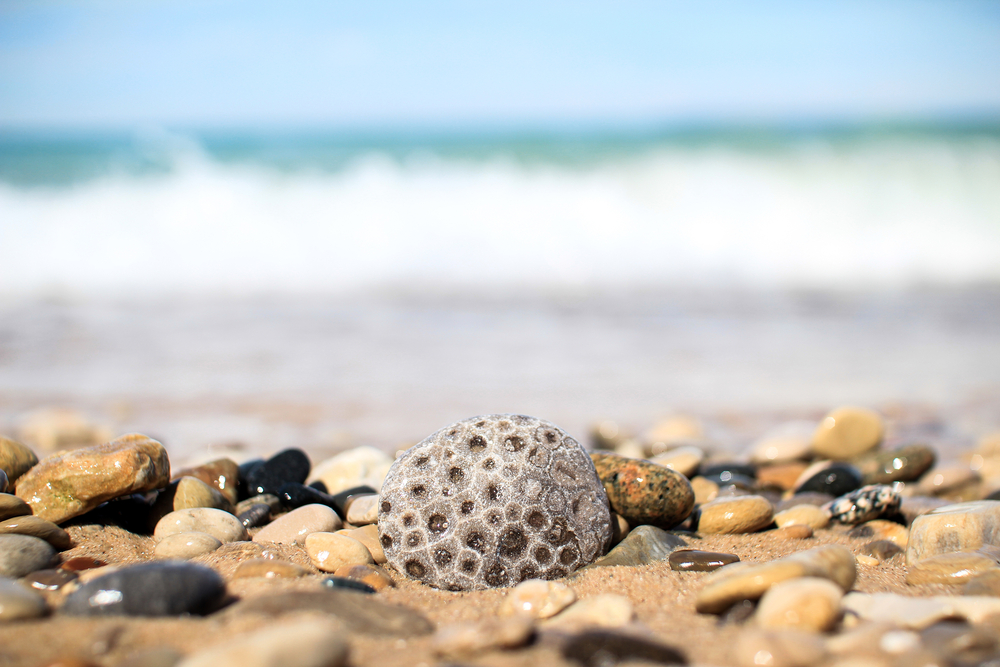 If you happen to be a resident of Michigan, you are no doubt familiar with the Petoskey (or Petosky) Stone. However, other than ardent rockhounds, many of the rest of us may not be as well-versed about this lovely fossilized stone, which deserves its time in the limelight. So here’s a short tractate of the Petoskey stone’s origins and unique name.

What Is A Petoskey Stone and How Are They Formed?

Petoskey stones have become a favorite find for rockhounds who have researched their unique properties and seek to add them to their personal collection. The stone is most often pebble-shaped and may be found in either a rough state inland or smooth state along shorelines of certain lakes.

Petosky stone is a fossil rock formed from the remains of the rugose coral Hexagonaria percarinata. These corals are believed to have existed before the dinosaurs and thrived during a time when a warm, shallow sea covered a large part of the Great Lakes region. At that time a large reef supported an abundant variety of sea life, including these six-sided coral colony dwellers and the plankton they fed on.

When living, the coral was made up of several parts that included soft living tissue called the polyp, the center, or ‘mouth,’ where food entered, and surrounding tentacles used for drawing food into the mouth. After the organisms died, the mouth was eventually filled in with mud and silt. After fossilization, it became a dark spot known as the ‘eye.’ Minerals such as calcite and silica replaced other cells, forming the unique fossil that exists today.

Later, glaciers scraped portions of the fossilized stones off the bedrock, smoothing them a bit as they pushed portions of the ancient reef along to what is now mostly the northwestern portion of Michigan’s lower peninsula. There are also some deposits to be found along the northeastern side of the tip of that peninsula.

This fossil is abundant in the Gravel Point Formation and was given its designation by Dr. Edwin Stumm in 1969 because of the shape of each individual coral in the colony.

How Petoskey Stones Got Their Name

The coral’s more common name is derived from the town of Petoskey, named after wealthy 19th-century fur trapper, landowner, and Ottawa Chief Petosegay. Petosegay was a descendant of a French nobleman and an Ottawa princess.

The name is said to mean “rising sun” or “sunbeam of promise.” The stones live up to their name, with what appears to be rays emanating from the center eye. Petoskey stones have been sought out by collectors for over 100 years along the shores around Petoskey and throughout the state.

The Best Places to Find a Petoskey Stone

The most prolific deposits of Petoskey stones are found along the two miles of shoreline from Harbor Springs to Petoskey, in the Little Traverse Bay area near the western tip of the lower peninsula of Michigan. Along the shoreline just about in the center of this area is the Petoskey State Park, where a recreational passport is required to enter and collect stones.

Also in Michigan, stones are common on the 1,000-foot long Magnus City Park Beach on the southern shore of Little Traverse Bay and along the Bay Front & Sunset Parks, near the marina about 2 miles south from Petoskey State Park.

Besides the Michigan lakeshore, these stones have also been found in New York, Iowa, Illinois, Indiana, and Ohio. Outside the U.S., Petoskey stones have been identified in the fossil records of some areas of Canada, Germany, and England. The stones may also be found in inland locations, generally as rough fossils, so collectors will need to stay alert for them.

How To Look For Petoskey Stones

Winter lake ice churns up the shoreline as it is pushed along by wind and waves, revealing a new crop of Petoskey stones for eager rockhounds. So early spring, just after the ice thaws, is the best time to search for the stones. Stones that have been tumbled by the waves along the shore will have a more polished look.

Stones that have been pushed up on the beach and allowed to dry may not be obvious. Without the polish of a collector to bring out the details of the fossils, they may simply look like common pebbles along the shore. Carrying a wet rag or small bucket of water or carrying stones to the waves to wet them will reveal their true nature. You can find other helpful tips on the internet to assist you in adding a few of these beautiful stones to your collection.

Petoskey stones can also be found in gravel pits throughout the state of Michigan, where retreating glacial activity left the stones high and dry. Some have even ended up in roadbeds around the state, so it’s hard to predict where you might find these fossilized treasures. 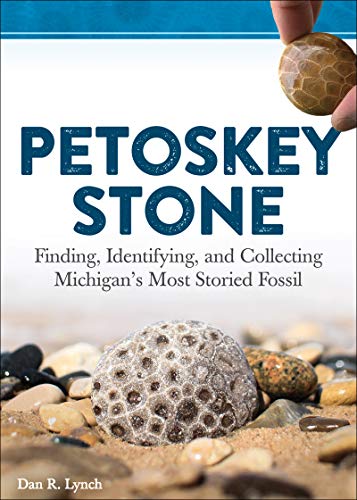 Petoskey Stone: Finding, Identifying, and Collecting Michigan’s Most Storied Fossil
$10.99
Buy on Amazon Learn More
If you click this link and make a purchase, I earn a commission at no additional cost to you.

How to Identify a Petoskey Stone

Petoskey stone specimens range in size from pebbles just a few inches long to large stones weighing up to 1,000 pounds. There is even one specimen estimated to weigh a ton. This behemoth can be found nestled beneath a sign at Sleeping Bear National Seashore about 90 miles south of Little Traverse Bay.

The fossils can be recognized by the tightly-packed, six-sided corallites which comprise them, along with the dark eye at the center. These are the fossilized exoskeletons of the now-extinct coral polyps. There are nine species of coral in this group, with colors varying from very light tan to dark brown or gray.

Dry stones can look like common light- to dark-colored limestone. Wetting them causes the hexagonal, mottled pattern inherent to the fossils to appear, and careful polishing can reveal an astounding depth of detail. Looking at a variety of online photos will give you an excellent idea of what to expect whether hunting on the beach or in a dry bed.

Also, keep an eye out for the rare “pink pet” Petoskey stone. The pink color is a result of iron ore becoming part of the fossilization process. About 1 in 100 stones on average have this unusual light pink hue.

Is It Legal to Pick Up (and Keep) Petoskey Stones?

It is illegal to remove any kind of stone, plant, or anything else live or dead, natural or manmade, from National Parks or any other federally owned lands. However, in Michigan‘s state parks, up to 25 pounds of stones may be collected per year.

Always verify the regulations for collecting fossils in the state or country you’ve decided to explore. Outside the U.S., check export laws as well in order to ensure that you are allowed to carry fossil remains outside that country’s borders.

Although there have been some assertions that there are enough Petoskey fossils to build another Mt. Everest, they are revealed in limited quantities to the collecting public, and conditions such as weather patterns and climate change can affect the numbers available from year to year. Limiting collecting helps assure specimens will be available for every eager rockhound. 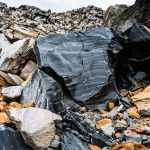 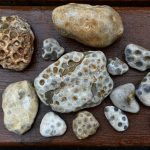